Cambridgeshire Based Glebe Farm Foods have won their David and Goliath legal battle against the multimillion-pound Swedish makers of plant milk, Oatly.

We wrote in June of how Oatly took legal action against Glebe Farm Foods, saying their product PureOaty took "unfair advantage" of their own drink.

High Court Judge Nicholas Caddick QC ruled in favour of the farm saying he did not see "any risk of injury to the distinctive character" of the Oatly brand.

The BBC reports that the Judge said that while there were similarities between the initial PureOaty packaging and the Oatly packaging, including the use of the colour blue and the use of an irregular font for the product name, these were "at a very general level. It is hard to see how any relevant confusion would arise from the defendant's use of the sign 'PureOaty'

He concluded: "On the facts of this case, I do not see that there is any risk of injury to the distinctive character of Oatly's marks." 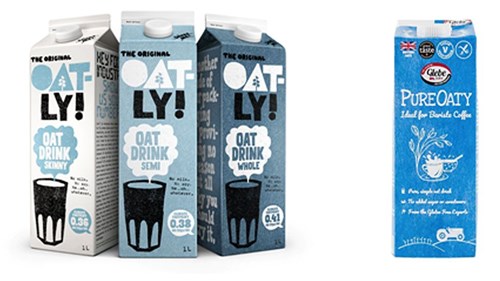 Mr Rayner said his farm had "always felt certain that we have done nothing wrong".

"You only need to look at the two products and packaging side by side to appreciate how different these brands are, and how unnecessary this legal action was," he said.

"It is enormously gratifying... to see that smaller independent companies can fight back and win.

A spokeswoman for Oatly said the company would not be appealing the decision.

"For us, this case has always been about protecting our trademark and how the single letter Y creates too much of a similarity between Oaty and Oatly."

She said Oatly wished Glebe Farm Foods "total success... moving forward", but added: "We just think they should do so in their own unique voice, just like we do.

Do a Trademark Search